Rail travel: A user experience in buying access to a network

Since last July I have been working all over the country, but predominantly Newcastle. Rarely I drive up. Mostly I get the train. I like trains: the chauffeur experience, the chance to stare out of the window, the chance to read and write, the “Will I get a seat?” gamble. We’ve a pretty good rail network. What about the system that runs the network?

Sometimes I book the ticket in advance, using the Trainline.com’s app. 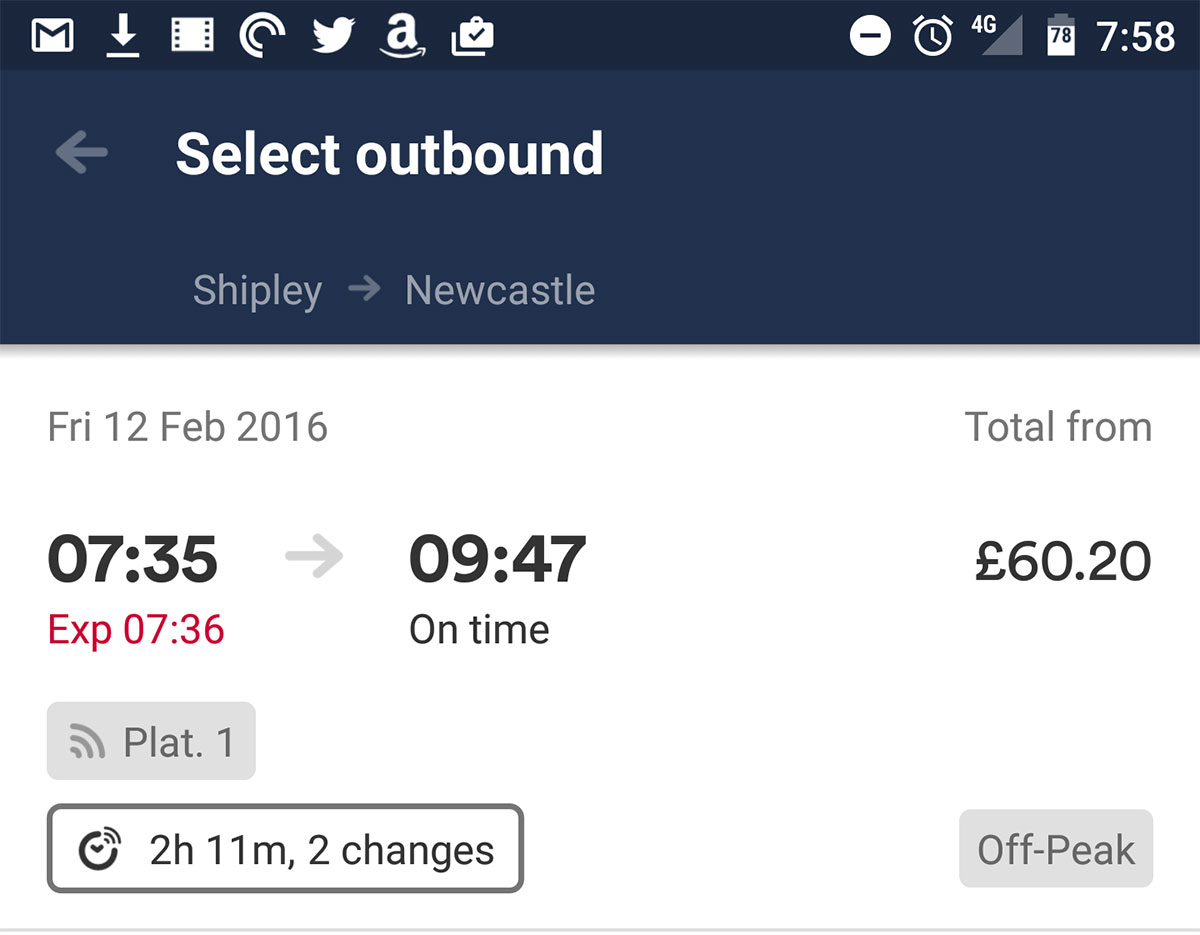 My user journey and needs are pretty straightforward.

I am traveling from Shipley to Newcastle. I will be coming back at some point in the next few days - I am not sure when, so let’s keep that open. I want to [leave at/arrive by] this time on that day. Show me the tickets I can choose from.

My options for leaving are always between 6am and 7:30am. Invariably I go for the cheapest option against the times presented. An off-peak return for about £60.

I am traveling from Shipley to Newcastle. I have turned up to travel so I want to leave as soon as possible so I can arrive at my destination as soon as possible. I will be coming back at some point in the next few days - I am not sure when, so let’s keep that open. Can I have a ticket, please?

I have two options: a manned ticket office or the automated ticket machine.

If I ask at the ticket office the Northern Rail staff usually ask “When are going?” And I’ll reply “Whenever the next train is.” I am then just told how it is, I pay, I get the ticket. Remember, we’re talking between 6am and 7:30am on a weekday morning. I have been given a ticket by someone I presume to be trained in providing customers with the right product. Again, the Newcastle journey is about £60, for the off-peak return. Do I question this? No. Would you?

If it is a ticket machine I have got into the habit of choosing what the ticket office gives me. Because? I trust the expertise of the staff I’d previously talked to. And – let’s be honest – if all the other options say it’s alright to choose the cheapest options, I will.

I’ve been doing this for about six months now, at least twice during the working week. £120 a week for two off-peak returns. £480 a month. At least. And that’s the cheapest option. Because that’s what a web service has told me is an option. Because that’s what humans have given me as my only option. And because the automated ticket machine doesn’t ask me when I am leaving and coming back, I just go with what the other two options have presented me.

Another thing to put into the mix: Not once has a train conductor pulled me up and said “There is a problem with this ticket.” “Ticket, please. Ah, thank you.” I have felt I have been doing it right, for the five or six months.

The ticket machine hasn’t been working properly since the station opened, highly erratic, so sometimes I pre-book my tickets and pick them up on my journey home. Or I hop on the train and buy a ticket from the Northern Rail conductor. On the train I ask for a return to Newcastle, and the conductor gives me one, again an off-peak return of about £60.

This morning the ticket machine at Apperley Bridge wasn’t working for me, so I hopped on the train. I know this is illegal, but what else could I do? Also there’s always the chance to buy a ticket on the train from the conductor. And all else fails there’s the ticket window at Leeds station.

By the time the train got into Leeds the conductor hadn’t reached me. So I went to the Tickets window at Leeds. I was made to buy a peak return to Newcastle. Cost: £75.50. That’s about fifteen quid more than every other time I had been to Newcastle over the past half a year.

This morning at that window I was told several things by the Northern Rail staff at Leeds station:

On the train from Leeds to York another passenger was pulled up for having an off-peak ticket. “But I’ve just bought it,” said the passenger. “This was the ticket I was just sold at the ticket office in Leeds.”

“On this First Transpennine Express train we can only accept peak tickets at this time, sir.”

“But I was sold this by the ticket office,” the passenger countered again.

“It’s your responsibility to ensure you have the right ticket for travel,” countered the conductor.

The exchange went on a little more. I said I’d had the same problem this morning. Several other passengers also piped in. The conductor was understanding, and then said this regularly happens. But, again, he reminded us we should know what off-peak and peak is.

And, again, my mind went back to the fact it was services hooked into the rail service that had presented the off-peak tickets to me.

To put the onus on the customer being responsible “to make the correct choice”? For a customer to be put in the position where they are told they have done wrong in the face of being presented with “right” choices? Something here is not right.