Preface: This originally started life a month back as my “six months in” post. Over the past month it’s languished in the background of my Macbook’s screen. I’ve never been able to give it shape, but I am sat on the train re-reading it. I am just going to get it out there, and maybe it will be something to revisit, to draw upon later.

One thing dwells in my mind over the past six months: How hard it has been.

“Digital transformation” (parentheses because it’s a buzz-phrase) is hard.

I’ll say that again for clarity without the obstructive brackets: “Digital transformation” is hard.

And at the mo it seems the vogue to get across how digital transformation is hard. I’m not trying to be trendy. Poke (an agency rare in that I have time for them) have recently blogged excellently about this so it must be a proper thing for concern.

Confession: I didn’t expect it to be easy, I expected it to be difficult. There was plenty about this hanging about before I came in. And Andrew was refreshingly candid when he interviewed me (to his credit). But I totally misunderstood where the difficulty would come from. I thought coming into somewhere that had been created with the purpose of delivering digital transformation it’d be a case of getting on, getting doing.

In my first weeks full-time in government I took the innocent/wide-eyed/idealistic approach of gathering user needs (and some business needs) to design something that solves human problems. 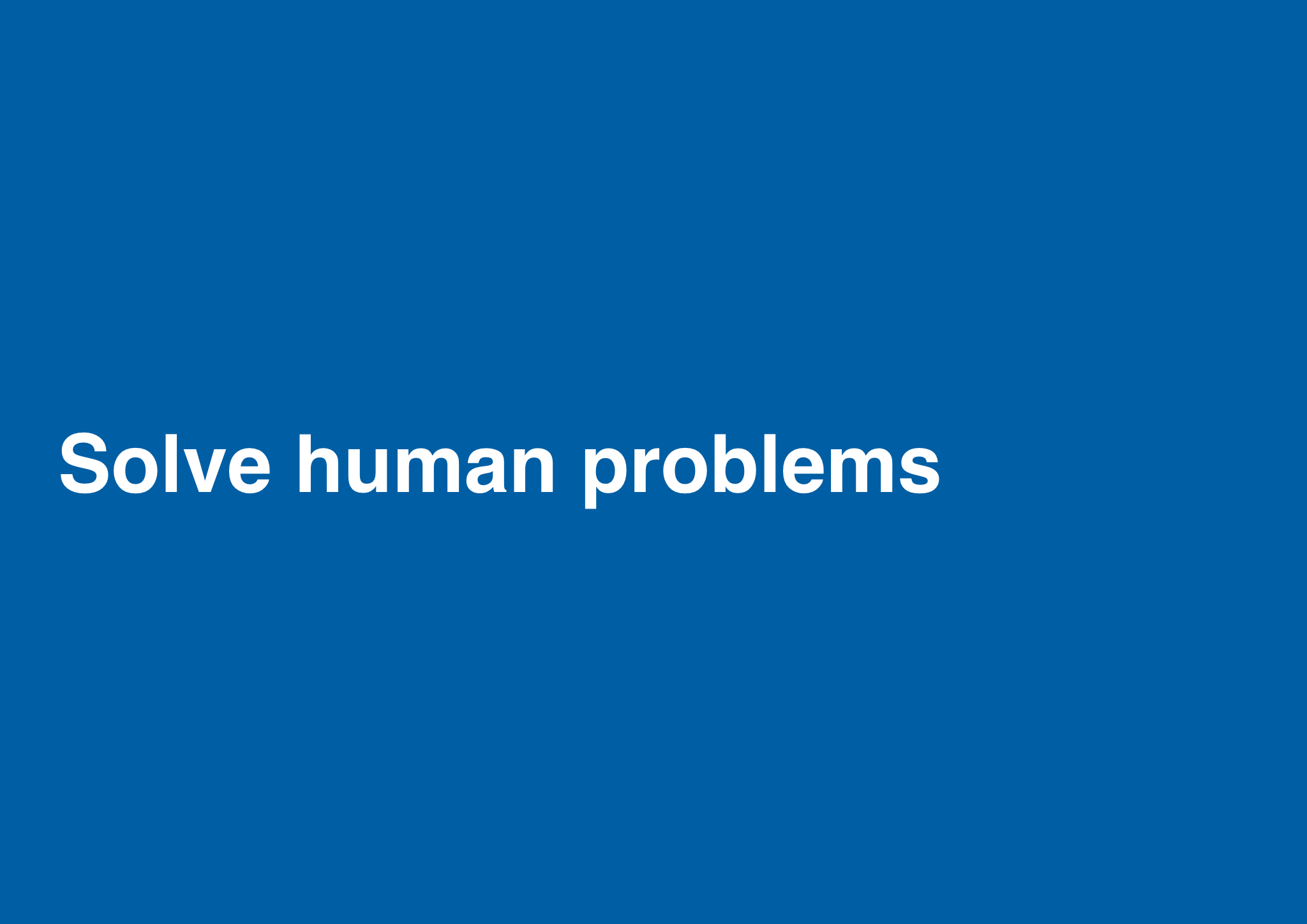 The current way is the way we’ve been doing it for fifteen, twenty years. It works.

The paper form, the only thing sat on the table in front of me in this meeting, became the focal point of the conversation.

Can you rework what you’ve done to match the paper form?

This was my first encounter with digital transformation’s barrier: The existing. The paper form, the culmination of years of work, design work at that, was the stick with which I was being beaten.

In that thirty minute meeting I realised my initial miscalculation. I had made an assumption that I believed to be true. The laxest thing I could have done. I felt daft. I felt lazy. I felt a little cheated.

A couple of months later I had a more candid admission about the current paper based process.

We’re stuck. This bit doesn’t work. We have been struggling for a couple of years.

On the train back from that meeting I ruminated. It’s hard to admit you’re stuck. It’s hard to ask for help. I had worked to get the people I was working with on-side, to gain their trust, and their confidence. But it I also saw something I should have realised sooner: digital transformation is change management. It needs to be treated like a programme.

For a few people — the “enlightened”, the “advocates”, the “trailblazers” — this is just getting everyone else, everything into how they already do things. Just. And that’s the pinch: It’s about change, changing the established order, changing the mindsets of how we go about things. It’s anything but just.

Change takes time. And patience. And, most of all, belief in and willing to do digital transformation.

And change is happening all of the time. Changing just won’t stop. It’s the pace to get things “up to scratch”, the pace to keep things moving along, and the need for nimbleness for that to happen.

Of course it’ll be hard, of course it’s hard. We’re doing in the face of tradition, years of training to continue that way of working. And of course it is obvious. But it wasn’t when I went in.

I read something recently that said leadership is doing nothing. It’s not. Leadership should be about doing something:

User experience has moved away from being just the designer’s role to that of the whole team. Never has design simultaneously been at the forefront and in danger of being watered down. But the designer’s role has become more focused, to concentrate on the product, to have permission to shape the service. And in government, despite its monopolies, it is a service, it is made of services. Design isn’t intangible. Design has visible, interactive manifestations. Design now has a point to lead.

Never lose sight of why we are doing it. To transform, enabled by digital and technology. It is enabled by people and it is for people. Aaron Snow from 18F brilliantly put the goals in front of us in one of his slides at Sprint 16 last week. 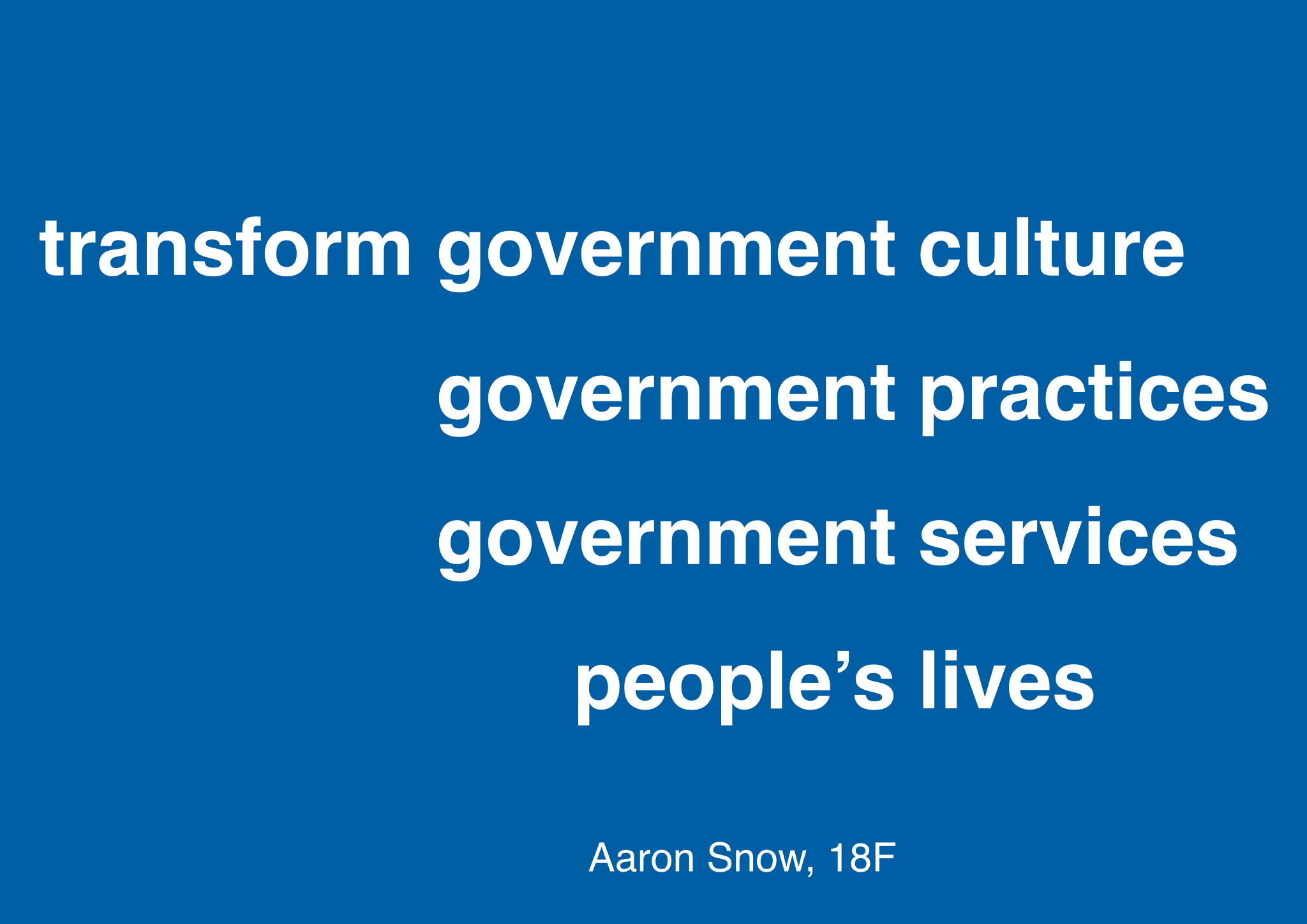 Have patience. Have understanding. Be mindful it is change we are dealing with — don’t let it slap you in the face like it did me. Keep on keeping on.