Another start at weeknotes. Maybe a case of new year, fresh start, but a convenience of reflecting in the last couple of months of last year.

I took 2018 as a walk on a path I was continually moving along and didn’t take much time to stop and think. When I did take some time to think in August I came back to work in September and straight back onto the Path Without Thinking. So, in November I started taking a little time out here and there — usually going out for lunch by myself, sometimes meeting someone to talk about some thing — and scribbled down and scurried away any notes. It wasn’t I was in a bad bad place, but more a lack of knowing what direction I was travelling in.

I worked through and then wrote down some better (and possibly good) habits, mostly to carry on and in some cases adopt. Examples:

I wasn’t planning to have an amazing, exciting or big year – just a better year, a steady year, a balanced year.

A more elaborated example: When I moved over from NHS Digital and to DWP Digital in November 2017 I wanted to continue talking in the open about the work I was involved with. Early last year I tried getting a weekly update out for the DWP Digital design community based out of Leeds. Pressures on the project I was on meant work work took priority over reporting on work. And usually by the end of the week I was fried from early starts for day trips to places like Glasgow and continual project refocuses. I found jotting down notes about the week wasn’t cathartic as there was very little I could do to change the current tide. One post was as far as I got and when things did calm down a little I had forgotten.

Other than one design notes piece I had written a post about my main work since last May – a post on the session I did at the DWP Digital product owners meet – and in July when I wrote about the design examples work we were doing at DWP Digital.

Having spent most of my career talking about my work and talking openly whenever I can 2018 was a frustrating year. So I am going to try to do 44 weeknotes this year. I was going to go for 52 but I will probably drop eight because of time off. That is fine. You have to be realistic about your capacity and your goals. Let’s get on, eh.

Monday was the last day of the 2018 and a working day – but a working from home day, hooray! From the kitchen table I could hear the kids doing whatever they were doing about the house, watch the squirrels, um, squirrel about outside, and get up to make a cup of coffee from freshly ground beans with ease. 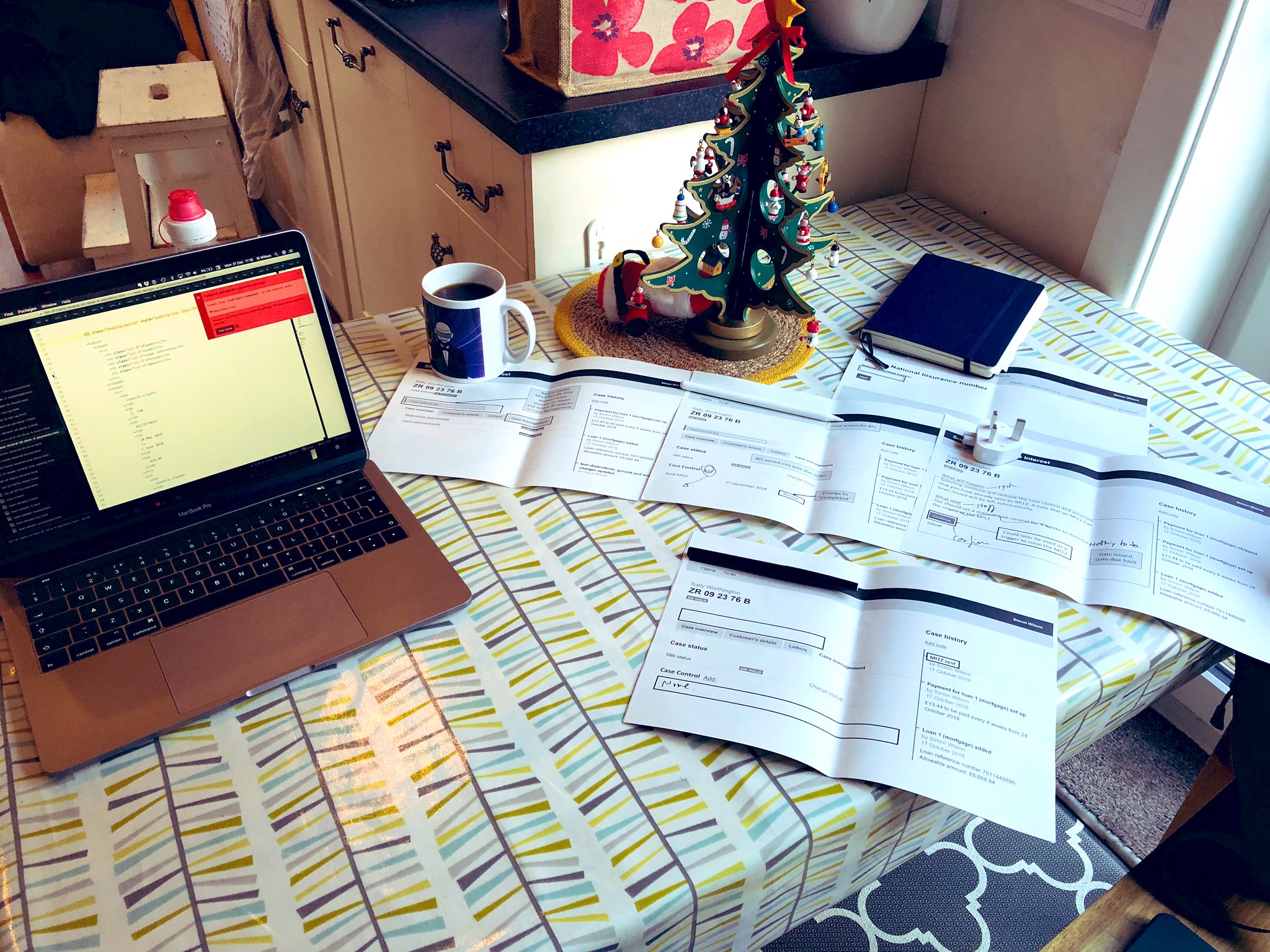 I continued exploring some designs for the project I am. One of the BAs on the project had done some draft design work (using Powerpoint, taking screen grabs and layering words and shapes on top of those) and I basically had to take his work and put them into a prototype. There was a little design exploration as some points to discuss came up but I treated the work I did as a stimulus to aid a conversation, writing down the points to go through with the BA.

After Tuesday off work I worked from home again on Wednesday because we are having the new dishwasher replaced.

At 8pm the night before AO drop me an SMS to tell me it’ll be getting sorted between 7am and 11am. I drop emails to sort a couple of meetings for the afternoon. I wake up the next day and shower and find an SMS from AO saying they’ll be coming between 3pm and 7pm. Ur. I drop emails replying to my own emails saying “soz, can we chat this morning instead?” At 8.30am I get a phone call from the people from AO saying they’ll be round in “five to ten minutes”, aaarrrrggghh. Service design, eh.

The fellas come round and have to take the cupboard front off the dishwasher. “Who put these screws in? The heads are gone. Did the job at the time but they weren’t thinking someone else might have to do some work after them. We’re going to have to rip the door off.” It feels like some sort analogy.

The BA — Mark — and I review the design work so far with a remote session. We store the in-browser prototype on a URL that Mark can get to. There’s some stuff that works, there’s stuff we know isn’t right and we talk through some possible answers. We end with questions but we’ll speak to people — staff that’d use the system, developers — to help us move forward.

I took a little break to look at how we make our interaction design (IxD) meets more accessible to non-interaction designers. Good design is everyone’s responsibility and involving people who help create better conditions for designing is paramount. Doing research at what other professions do to involve people felt a sensible way of seeing what was already working. Got some ideas, which I’ll develop next week

I found a little time to tidy up my neglected Goodreads account so I can use that to “bookmark” what I am reading and want to read. Feel free to befriend me in Goodreads.

On Friday I get the train into work: the car park is pretty empty, there’s seats on the train free, no need to stand, all a rarity. Ten minutes of unexpected reading rather than the usual standing toe-to-toe with other passengers by a carriage door willing away the ten minutes of so until we get to Leeds. I wish it was like that most journeys. I enjoyed it while I could.

Friday morning I take part in a good remote session going over some other design work with Mark and Gary (a developer). We find more problems with what we are talking through (a feature to help staff send letters), start unraveling and finding even more problems, more more more. I take notes. I spend the rest of the day sketching some possible ways to make things better, and use some time to start stitching together some designs in browser again. Go over where we are up to on Monday.

At the start of the week I start a quick and easy prototype to track coffees I drink. During the week I use it. I will write about this little experiment sometime later.

I saw in the new year at a party. I struggle at parties because I am terrible at small talk with people I don’t really know, so spent a lot of the evening with a German Shepherd dog and talking to someone with visual disabilities. Ending 2018 talking about “How do you set up a router that tells you what to do by lights when you cannot see the lights?” A good reminder of the challenges of designing for everyone — and a reflection to 2018 that a few years back I was working on actual physical products (like the router is) and I’d spent much of the year effectively copy and pasting interfaces together from spec documents.

On New Year’s day I have a trip home, to Grimsby, to see Town play Mansfield. I have seen a lot of Town this season, the first season for a long time I have been this much. I have really enjoyed watching the team and the way they play come together this season. Earlier this season Town had a six match losing streak, callers to Radio Humberside were all Sack Jolley!, but riding it out, believing in the process, trusting the process, feels something we need to value, give it a chance to play out. Town lost 1–0 on New Year’s Day, but I came away enthused: they kept going, they kept going with an approach that relies on their movement and passing, both with measure, with calculation. If you’re further curious there’s a report of the game from Tony Butcher on Cod Almighty.)

Leeds gov design meet number 7 is at the end of the month, tying in with Service Week. You can get a place on Eventbrite.