I spent Saturday at the splendid Duke Studios in Leeds for a hack-day-cum-participatory-workshop to help design an NHS supported mental health and wellbeing website for young people.

Unlike at the recent Leeds GovJam, where my role was more of a ‘listener’ and ‘director’ to the teams, for this workshop I was heavily hands-on and in the thick of the action as one of several digital service designers assigned to one of three teams.

The goals for the workshop: At the end of the day of the day each team was to present their product’s ‘prototype’ within ten minutes to a panel. The teams’ thought would then feed into a specification for this product.

Although I was in a team that was inexperienced in ‘designing’ in a formal process/sense, my teammates were experienced in the world and were refreshingly open with their experiences and how they could shape the product.

I was keen to ensure that our table had a sharing environment, so thoughts and ideas and the discussion around those was carried out without any judgment, and to allow taking positives wherever possible.

With an exceedingly tight amount of time to understand the day’s goal(s), to discuss, and then work through ideas to a form that was understandable to an unintiated audience, a very brisk work pace was needed.

There were some fascinating insight within my team around an understanding and examination of a potential user’s digital journey. Using their own experiences - both every day and then within the context of a mental health and wellbeing service - the guys were fantastic bringing that to understanding what other people may want. 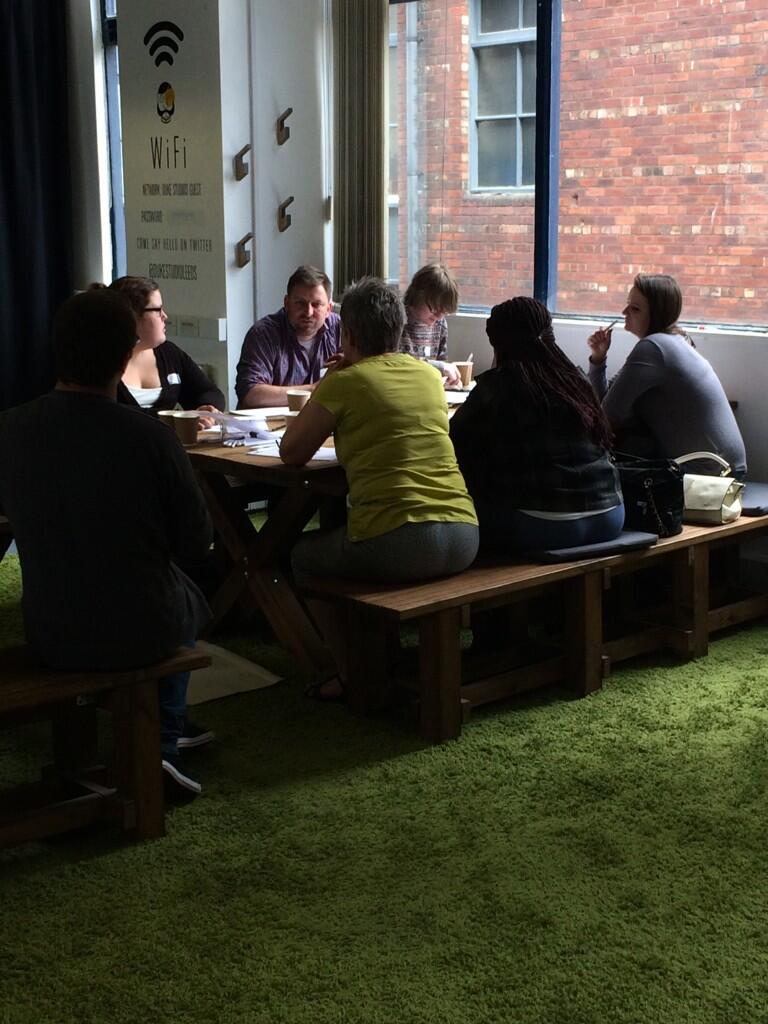 What devices would they use? How would they use them? The team looked at differences in behaviour on mobile phones, tablets, and ‘traditional’ computers.

Early on it was recognised that internet isn’t just websites - it’s also apps, it’s video, it’s sound, it’s other services. Thinking about habits YouTube came up early as a preferred ‘search engine’ for answers, and video was thought to be ideal to create and tell create engaging, connecting stories that felt real.

There was also how the ‘digital’ path could end with a user actually using their mobile device as a communication device, notably Facebook style chat, forums, and also the sometimes yet obviously missed use for phone calls and SMSes!

The idea of mental heath and wellbeing was also given due attention. The phrase ‘mental health’ isn’t about ‘bad’. On its own it should be about an appraisal of state - but is that how the public perceives it? Is “mental health” associated only with ‘issues’? Again, something else to consider.

With the brief for the product to be aimed at young adults aged between 12 and 19, there was some illuminating discussion about whether the ‘target audience’ is a slight red herring: Is that the full audience? After some discussion we explored the idea of the site offering guidance, understanding, and assurance to people, but also people who are around that group, such as parents who might not understand their own chidren and would seek the internet to give them answers. The tone of how the product speaks with - and to when needs be - its audience was also key. (Although we didn’t have time delve further into this other a one sheet of keywords, another team did seem to have the time and their thoughts echoed ours.) And the purpose and point of the product needs to be clear when people visit aspects of it.

Illustrating all this and more within the ten minutes presentaton coherently and tighly was another fun challenge, and there was a frantic twenty mintues before we were due to present as we wrote down and drew thoughts and ideas to tell a story!

The team I was in did some great work, and they can all be proud of their contribution and want to “get on”. I feel the most proud they showed empathy; they understood, embraced and explored the idea of a service; and wanted their service to plug into other services out there whether they were referrals to a GP or awareness of organisations such as Childline, the Market Place, or St George’s Crypt (to give several of many examples the team came up with).

The other two teams also did some fab work, and each team shared some similar ground with their discovery, but all came up with different approaches for their solutions and also how they presented those at the end of the day. Seeing how it could all fit together in my mind was exciting - and I could sense the team driving this project were feeling the same.

Great work came out of the day, it was fun to take part in, and there’s some fascinating challenges ahead for the project, notably being accessible to such a potentially wide audience and how the eventual product can feel personalised in a lean enough manner so it isn’t dissuasive. Exciting stuff!