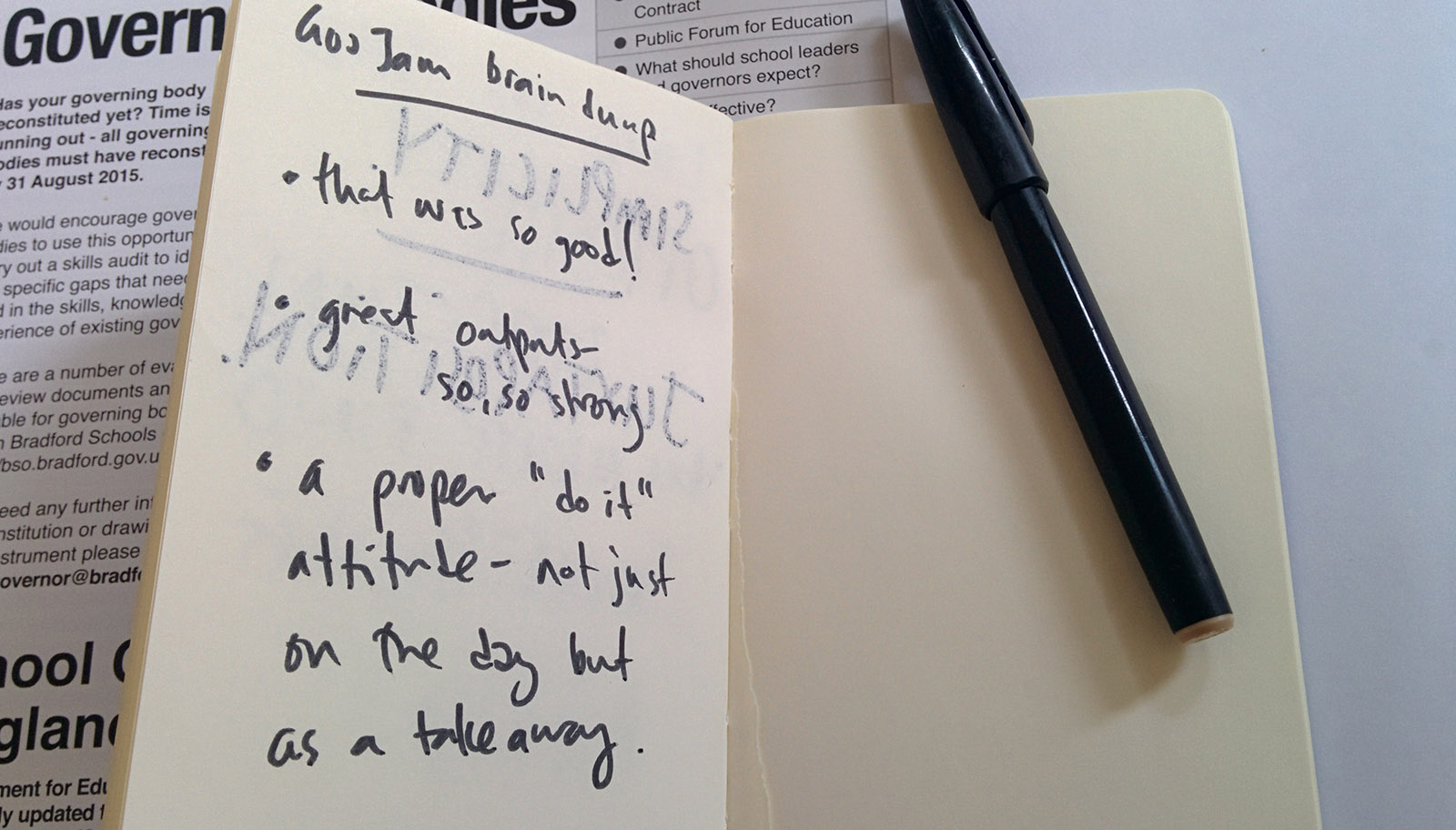 To compare, usually when I go to “gigs”, public or private, I get a good twenty down.

I usually write the points up digitally, some as a bullet list, some as reports for whoever I am working with/for, some as journal entries for my private blog - and some of those I make public here, like my recent Age Camp post. (If you’re curious, Age Camp had nearly forty points, most of which formed the blog post.) I’ve never had as few as three points though.

After Leeds GovJam on Thursday evening I wrote those points down. In short I felt Leeds GovJam was so good! I might have been getting carried away, rose-tinted specs, and all that. I held back from bashing this out quickly, to get it out as soon after the event as possible. Let it settle a bit.

In the meantime I asked a few people who attended their thoughts. Every one I asked replied saying they enjoyed it, it was good. If they thought it was good, affirmation of my initial take, let’s leave it at that.

But I’m always hyper-critical of workshops/jams/hacks/whatever, to make sure we can get the best out of what we’ve just done, but also get better in the future. No-one likes giving up their time to feel it’s wasted, yeah?

My thoughts on GovJam are settled though. I think it’s one of the few events I’ve been to where just about everything seemed to click.

I couldn’t make the Wednesday of the jam so coming in on Thursday was a good barometer of progress for the jam. I was amazed. The work that had already been done? Based on previous experiences they were well ahead.

Not just were they ahead but hovering around the teams, eavesdropping, having chats with them showed they were having some highly focused discussions that led to productive doing, outstanding teamwork that was producing some great “outputs”.

Evident was such a breadth of working to create their prototypes, from acting out personas within the teams, walking the streets of Leeds city centre to speak to potential users, Survey Monkey surveys, using Skype to speak to another team at another GovJam to hook up around a similar idea. Fantastic. It’s the sort of culture that companies try to engineer. And it was just happening here.

At the back of my mind was the only downside I felt from last year’s Leeds GovJam (noted here): ‘A few thinking “Not sure my boss will agree/understand/get this.”’ There was none of that that I heard. This year’s Leeds GovJam went way beyond that reservation.

Some people were almost fearless and optimistic: “We’ll work out a way this could happen.” They literally wanted to make this thing they were doing happen out in the real world!

One team had thought through the business case for their project to make it seem viable to get running out there: “Start small, build up.”

Another project that was thought up, turns up something very similar was already simmering within Leeds council. “We’re going to link up so we can share our thoughts and energy.”

And another team were thinking of ways they could get some funding to make their idea happen.

There’s a lot of talk these days on the idea of a something having legacy. Looking for a legacy from the off? Pah! (Excellently addressed in an episode of Twenty Twelve, by the way.)

I volunteer my time to help the other Leeds GovJam organisers (also all volunteers), use my skills and experience so the event attendees can live in the moment of being there, learn from doing, and let them enjoy their time there. From the mood and outputs big tick there already.

And if the attendees take all that away and apply afterwards, bonus, especially with the focus of GovJam being on, well, “gov”. This is stuff that about people, about the people out there, and this stuff can affect people.

I wouldn’t brazenly say a productive Leeds GovJam means it “has legacy”. But through the exploration of real world problems and the teams thinking how they could make their ideas happen, it does feel this year’s Leeds GovJam could be the starting point for a number of potentially effective actions. The possibility of that is amazing!

By the way. For the record I’ve never had just three points. The previous low was seven. For once it’s great to see the bar being lowered.